Why Jayden and Dwain Should Get Demoted

Hello guys, its me, Superhero123 with some really bad news. Our Leader Jayden and our 2ic Dwain started being impolite. They got people and they told them if they wont join they will hack their IP’s. Read more for pics to proof that:

He says to a guy who came to chat that he will ban him if he doesnt join.

Dwain says he is leader and he said he will ddos me if I show those pics to people. 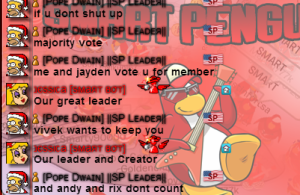 He doesnt care about Vivek is main leader and he also says that andy and rix.

Scream says that even if he is a mod he is stronger than everyone.

Finally Jayden says than sp has no rules.

Posted on March 12, 2014, in Uncategorized. Bookmark the permalink. 3 Comments.